‘Fish and chips in my wedding dress, it was just so us’ – Rachel and Ewan on how to get married your way

Rachel and Ewan from Angus, originally planned to get married on 9th May 2020. But as the pandemic took hold, it became clear that was not an option and so they pushed their wedding day back to 9th January 2021.

At the time they believed that would be far enough to allow a relatively normal celebration to happen but as winter wore on, the crisis only deepened.

On Boxing day Scotland had entered Tier Four, but before long even tougher restrictions were on the horizon. Rachel, working as a nurse in a busy hospital, saw it all coming. 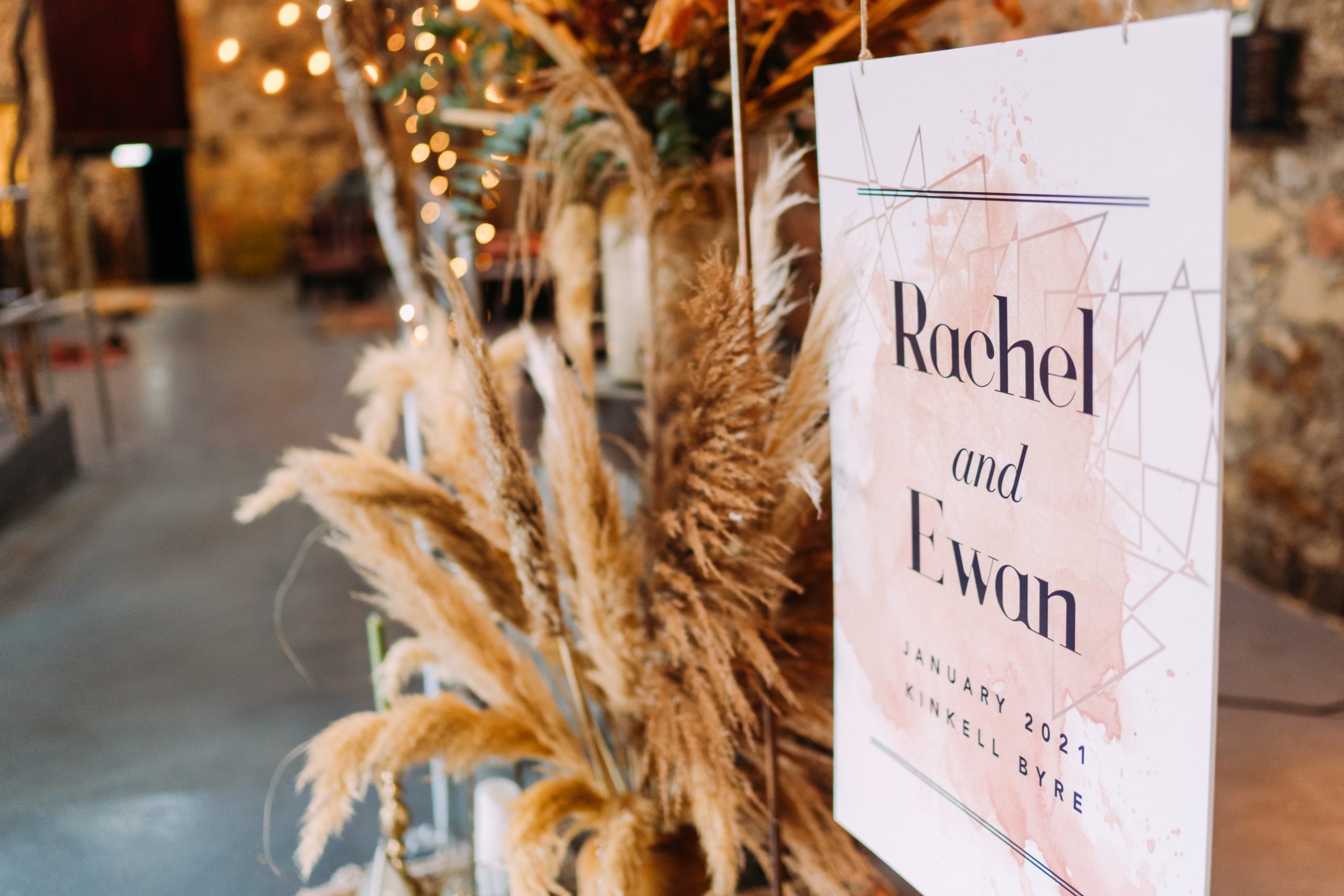 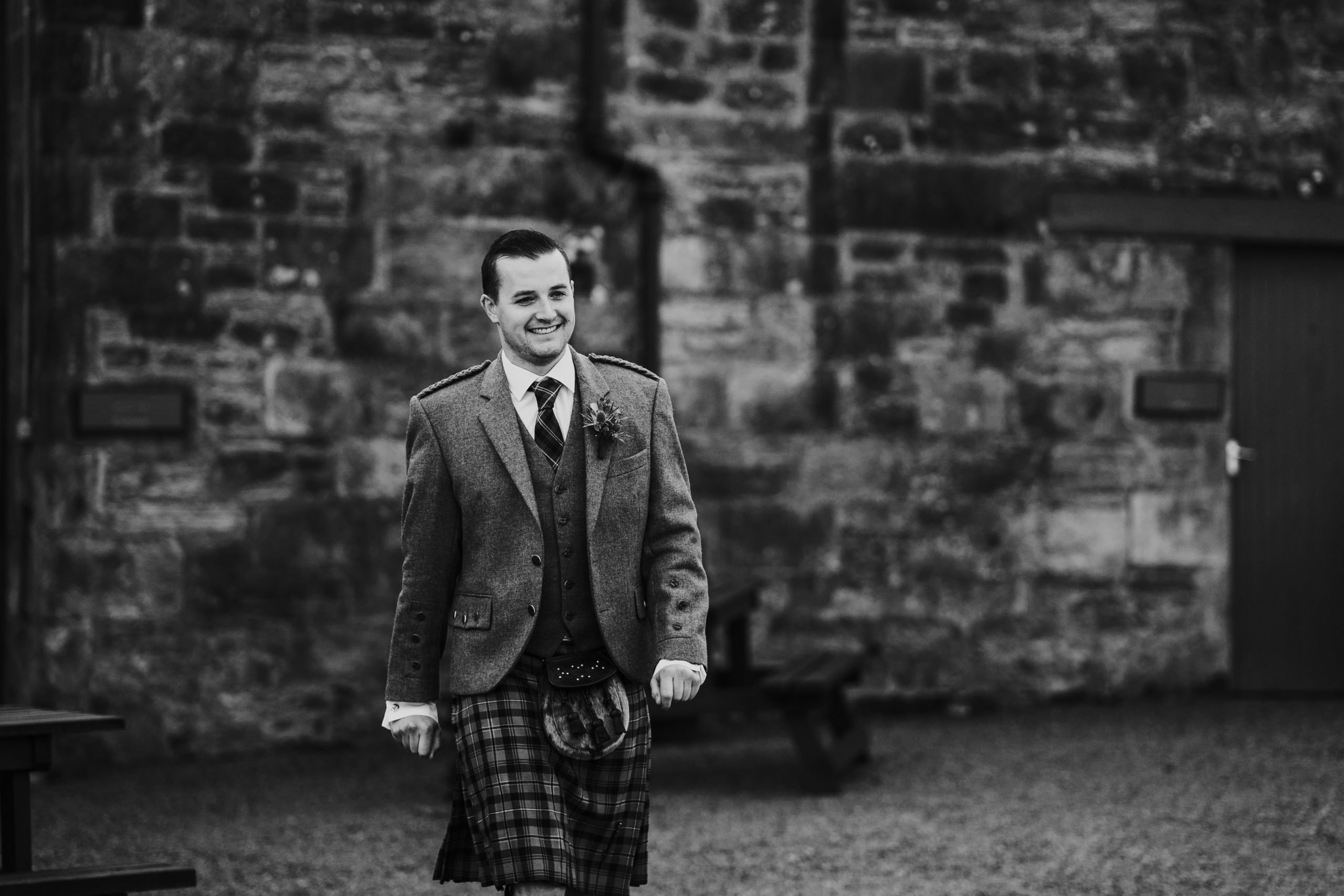 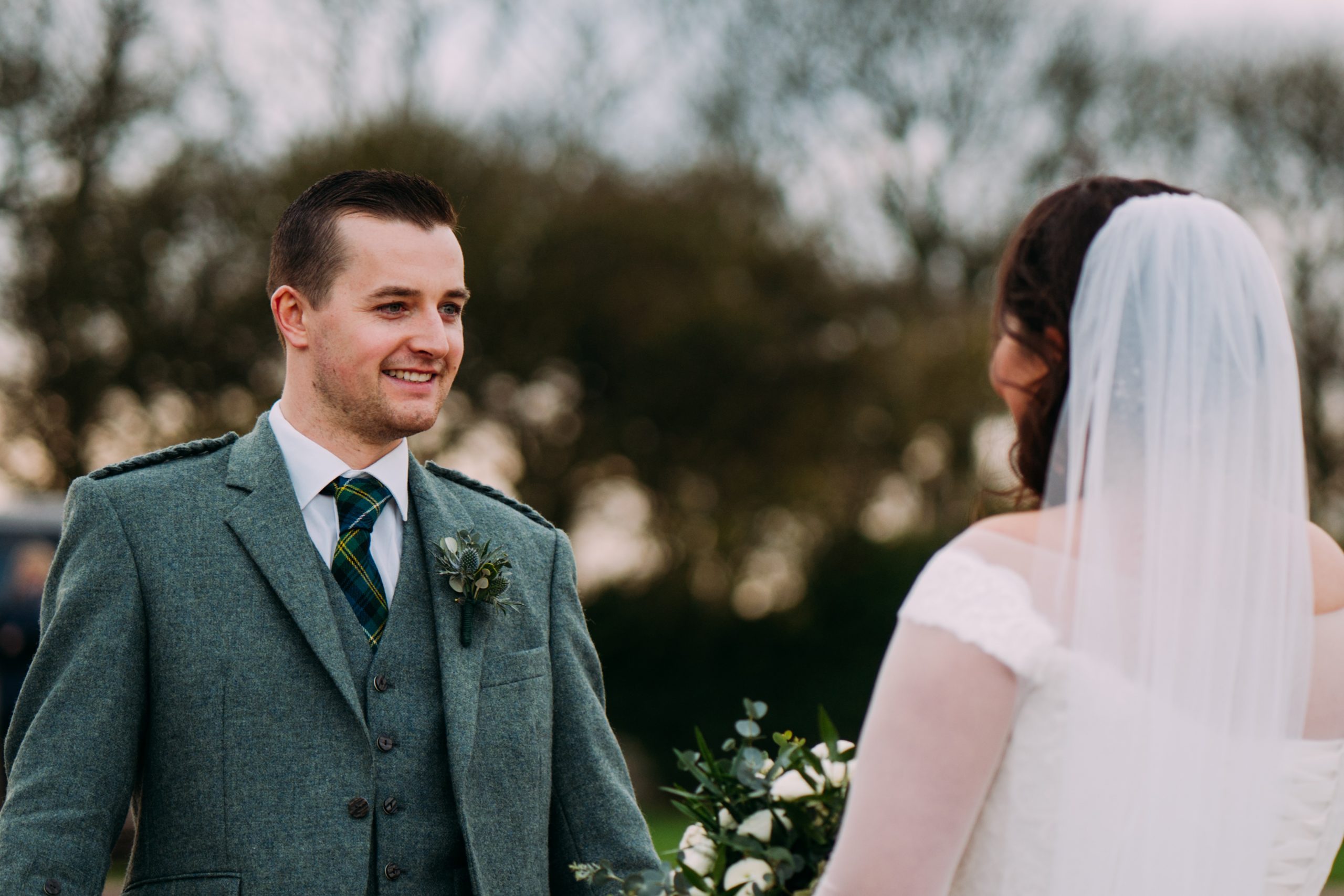 ‘I work in A&E so I could see around me the chaos that was unfolding,’ she said. ‘I kept watching the daily numbers rising. I was working the weekend before our wedding and I just knew a lockdown was coming.

On Monday 4th January the Scottish government announced another national lockdown, along with a raft of new restrictions that included limiting weddings to a maximum of 5 people.

The new rules came into force on Friday morning – the day before Rachel and Ewan’s wedding day.

‘I was listening the announcement and she [Nicola Sturgeon] kept saying Friday, Friday and I just kept thinking does that mean we could still get married on Thursday? Can we bring it all forward 48 hours? 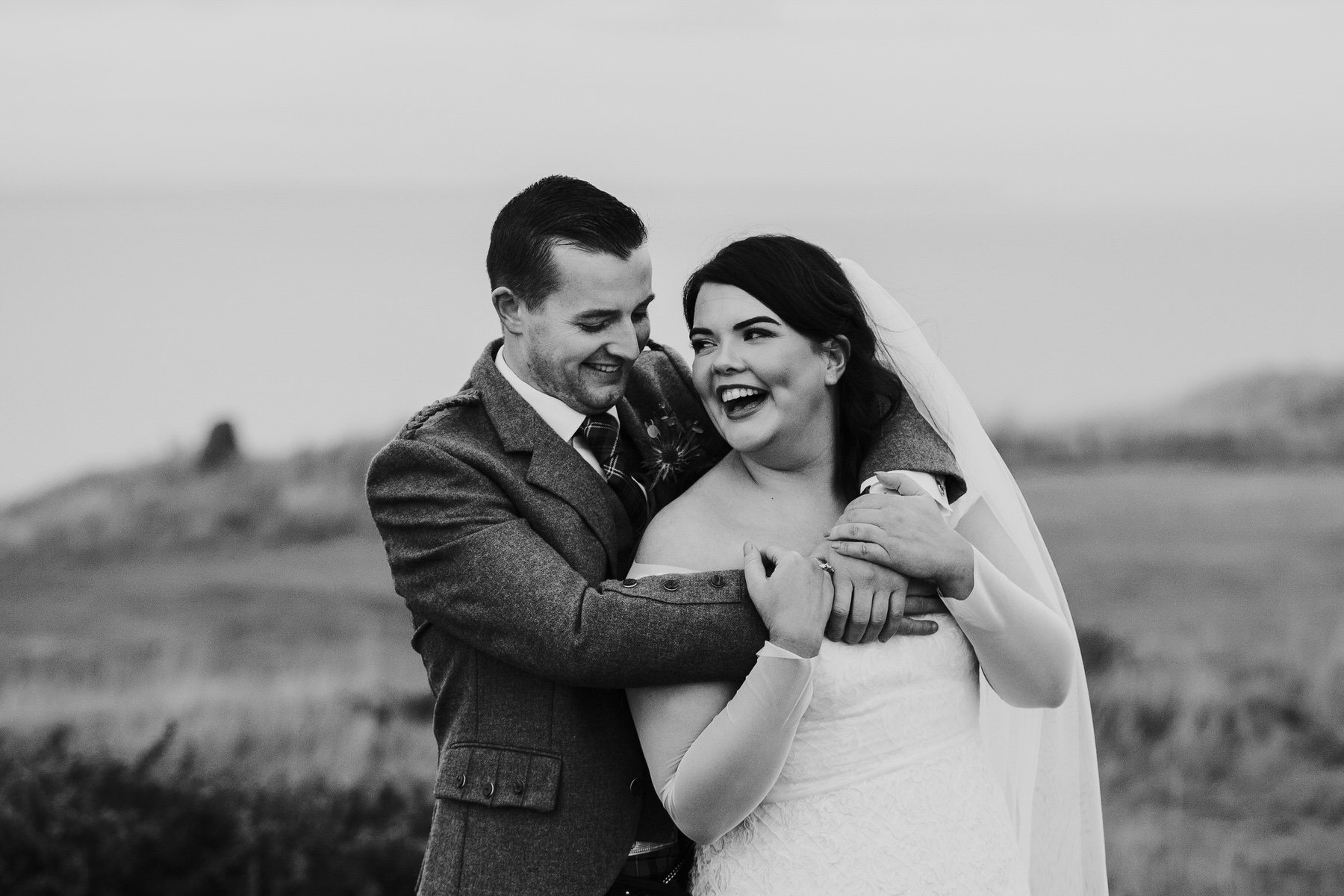 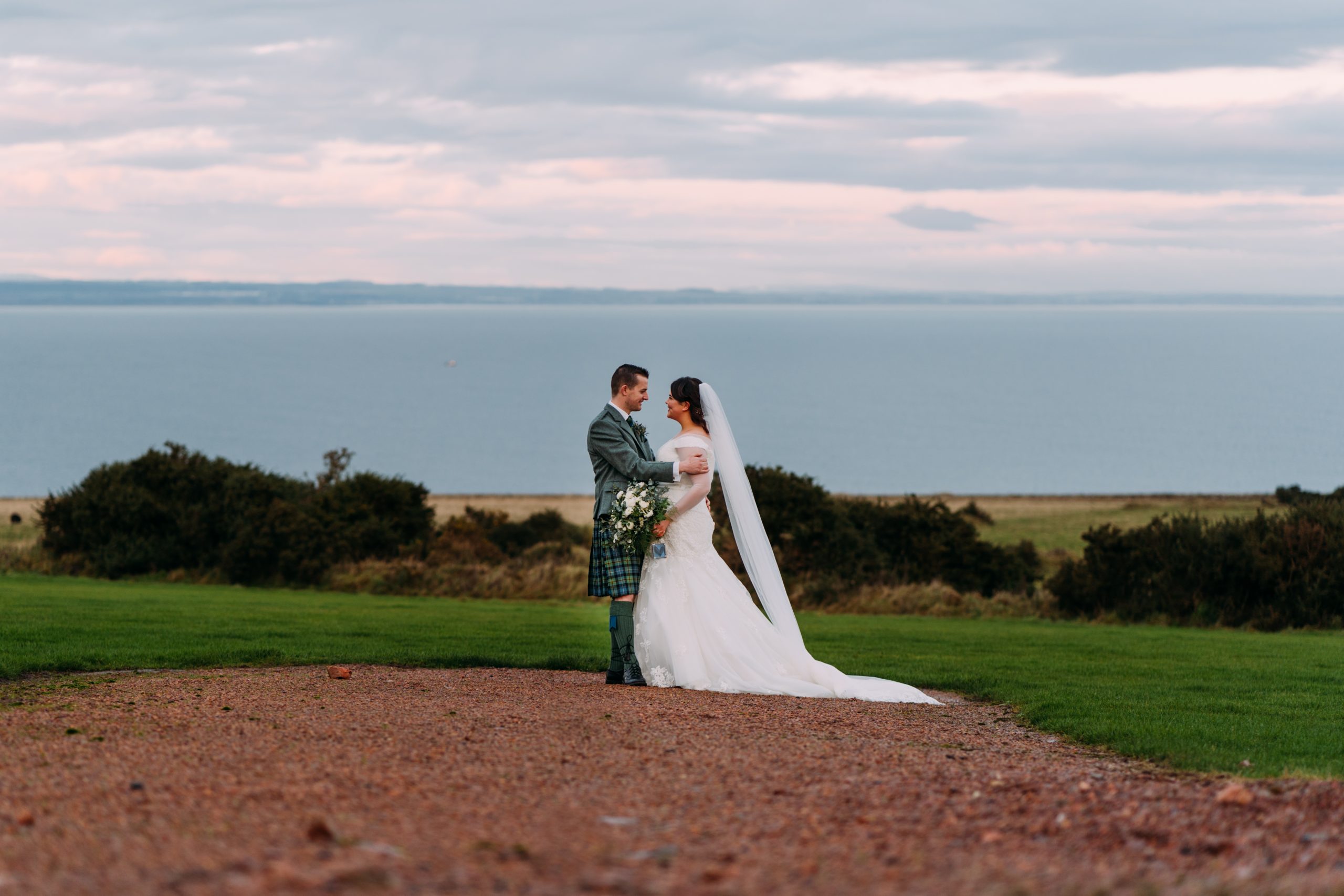 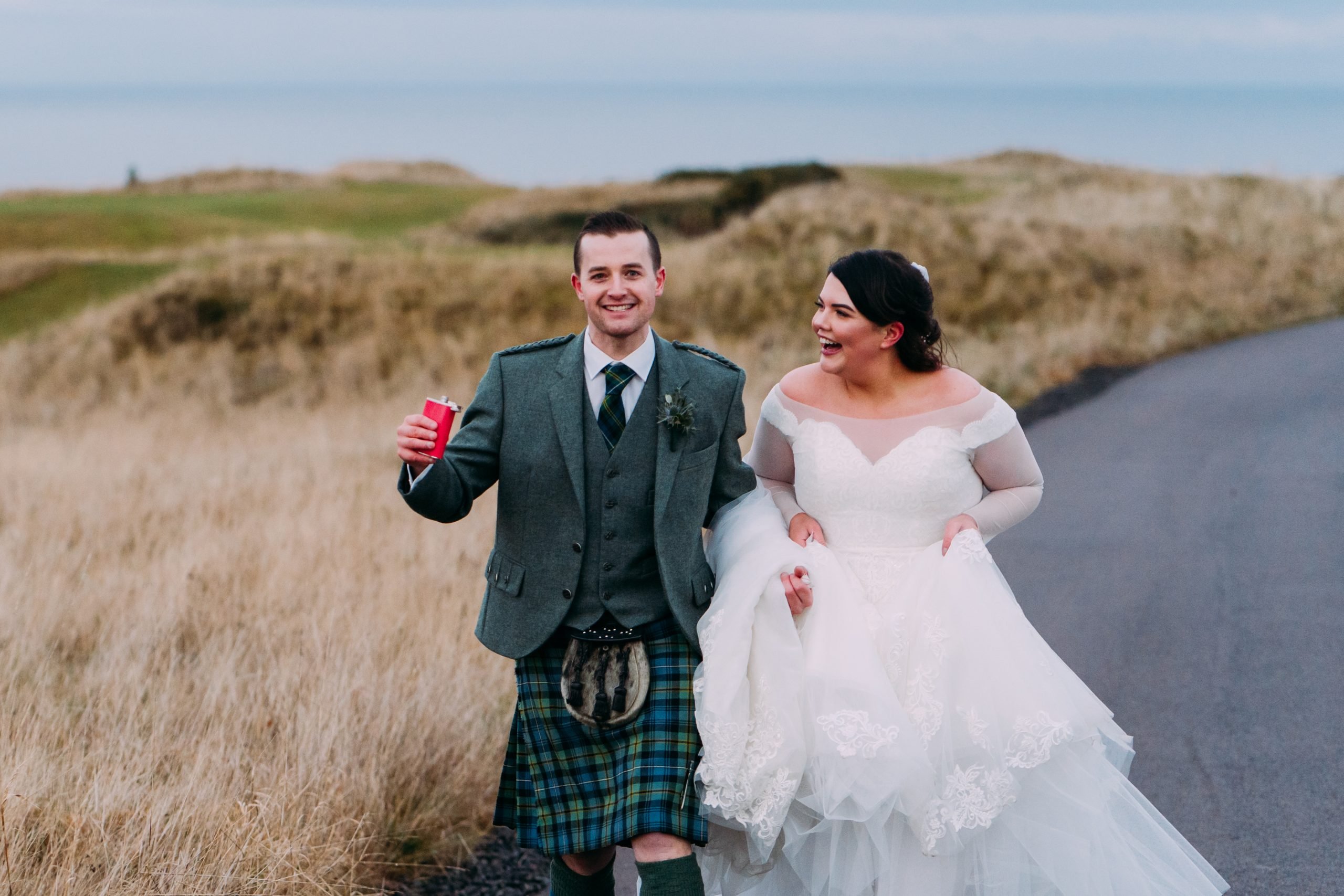 ‘Ewan definitely thought I was a bit mental at first, but he took about 30 minutes to think about it and then he was onboard too.

‘We knew we would not be able to have a reception anymore, but we felt really determined that we were getting married, no matter what. By that point it had turned into such a long engagement, actually getting married felt almost like a pipe dream.’

By moving their date forward the couple avoided the strictest of the new limitations, nevertheless they chose to cut down their guest list even further to try and keep people safe.

‘We understood why the restrictions were being changed and even though technically it would have been allowed, we didn’t think it felt morally right to have a group of 20 people together the night before.

‘We just wanted to have our very nearest and dearest there.’ 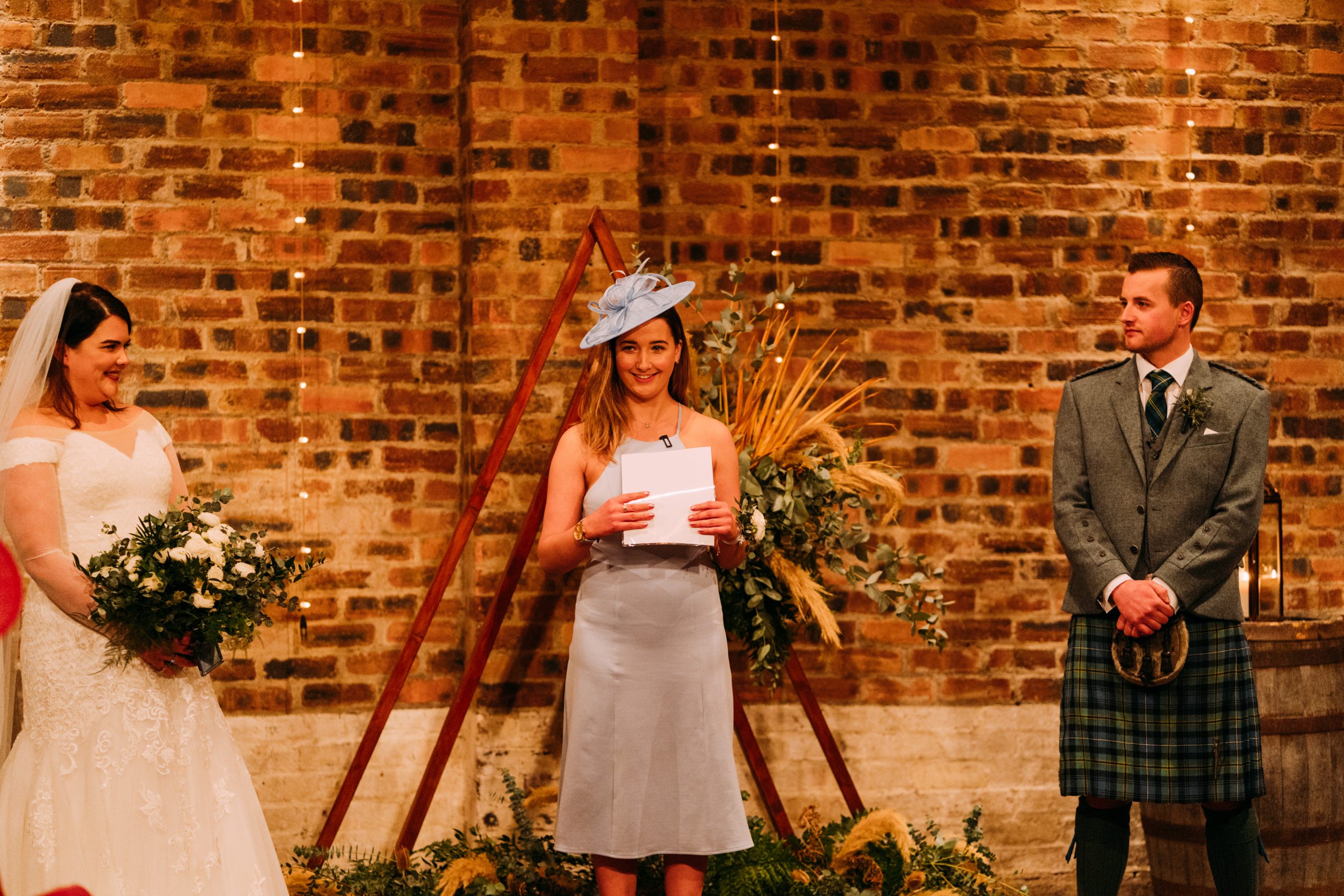 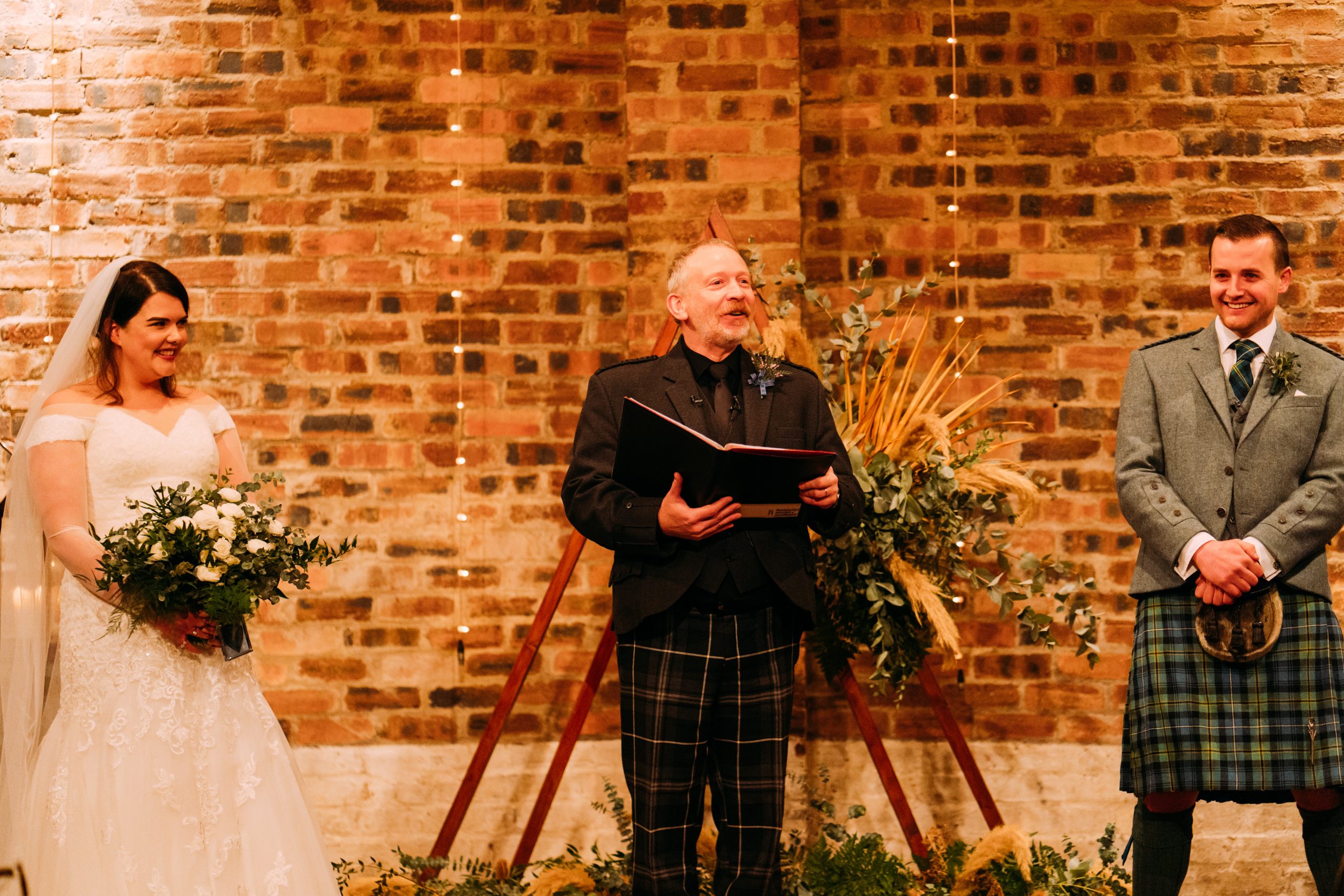 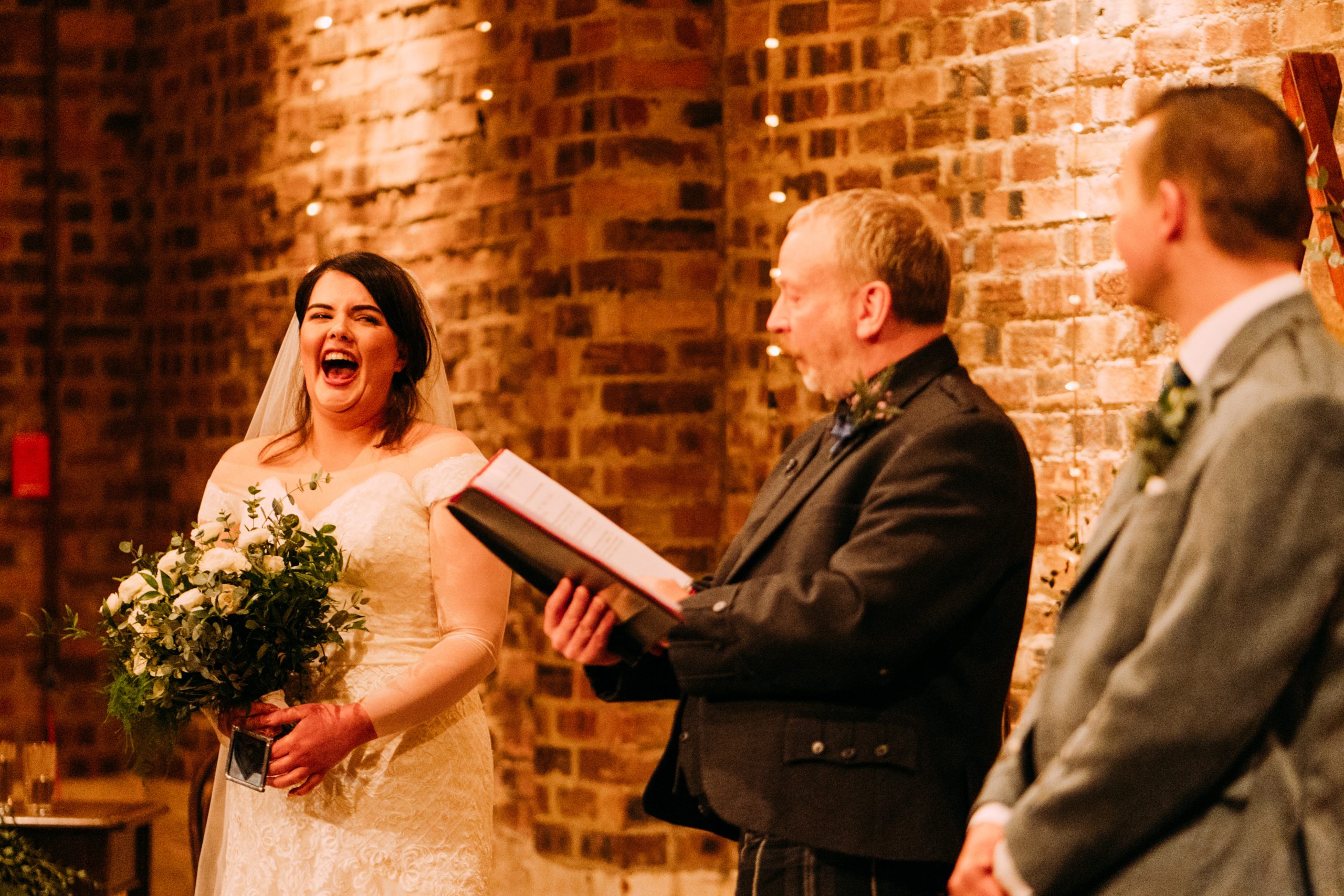 One of those special guests was Ewan’s grandma, Granny Dyce. There was no way that she would be able to attend the wedding but instead Rachel and Ewan stopped at her nursing home on the way to the service. Staff there helped Granny Dyce to the window so she could see the couple in their wedding outfits and wave them off on their way.

‘That was such a special moment, she was so happy to see us off like that, it was really wonderful. She passed away the following week so that makes it even more important that we were able to include her.’

The wedding day dawned bright and crisp and the couple arrived at the venue mid-afternoon for a pre-wedding shoot with Eilidh. It was absolutely freezing and though they had almost turned blue by the end, were rewarded for their hardiness with an amazing pink-skied winter sunset.

And yet there was one final twist still to come. At the end of the shoot Rachel suddenly realised that she didn’t have the marriage schedule. Ewan didn’t have it either and with less than two hours until their wedding, the pair launched a desperate hunt for the vital piece of paper that would make their marriage legal. 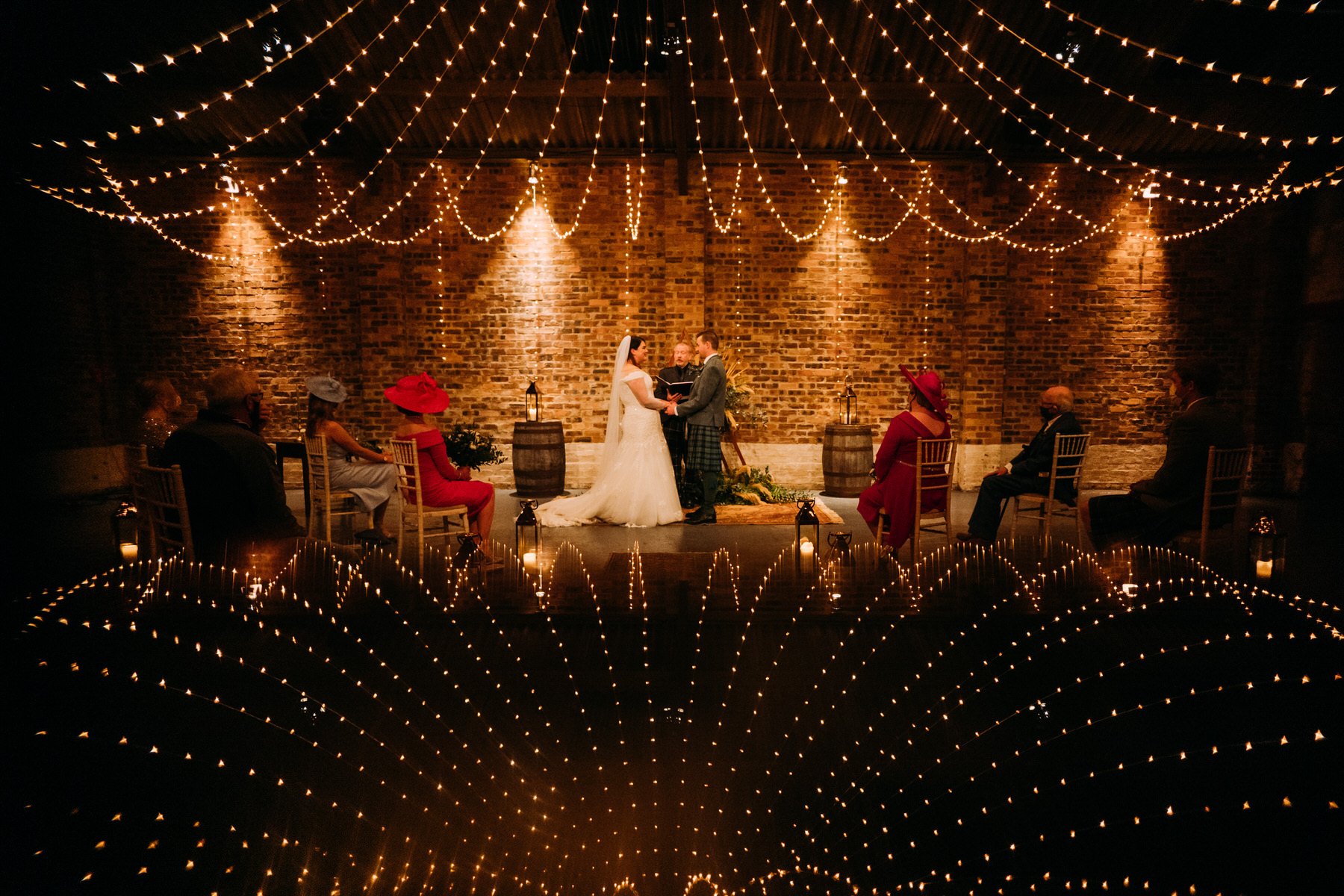 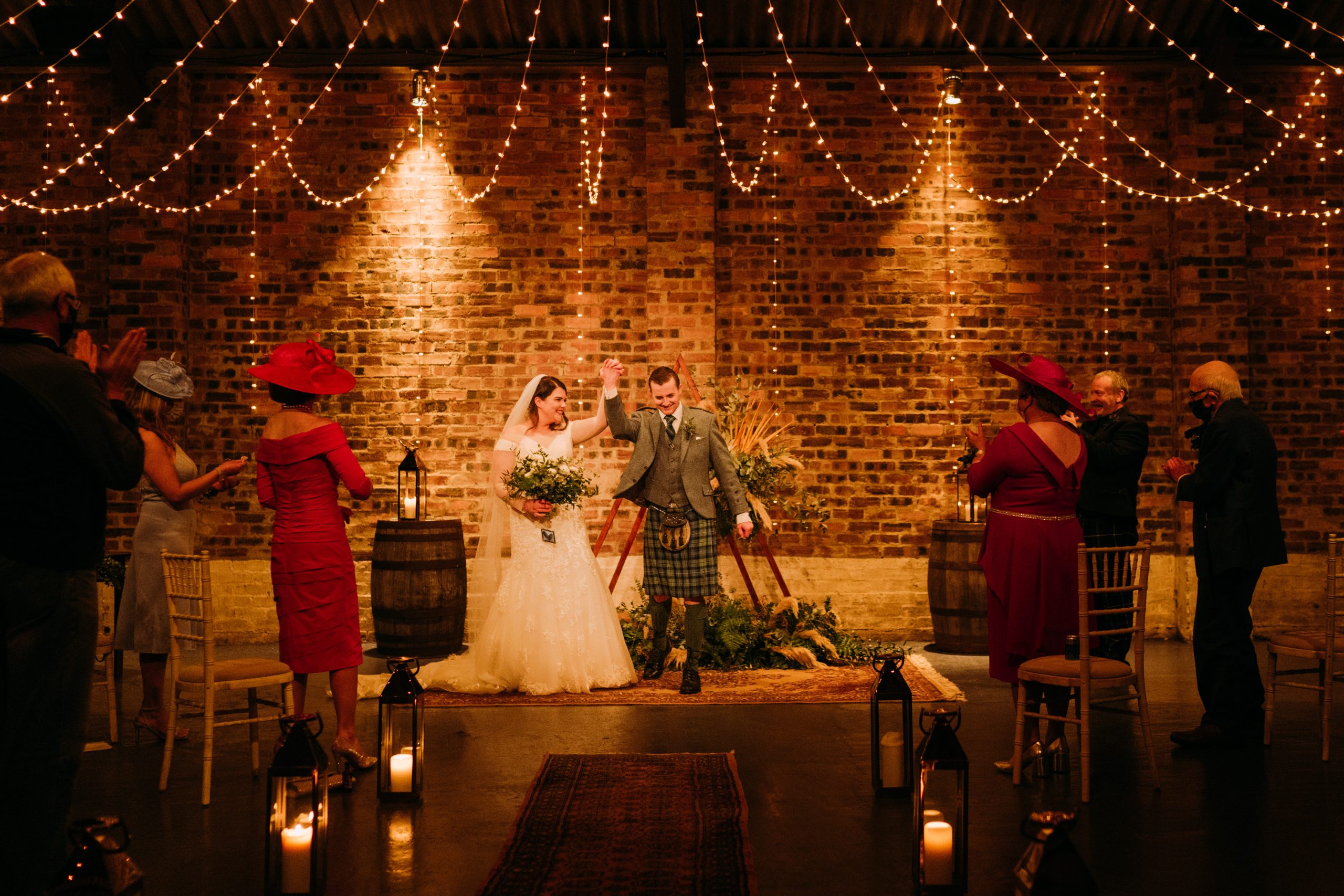 Back in Kirriemuir, relatives searched Ewan’s car, hoping to uncover the schedule but couldn’t still couldn’t find it. Soon it became clear the only place left to search was the Airbnb where the couple were staying that night – but the only people who had the keys were Rachel and Ewan themselves.

Ewan’s Uncle Norman was drafted in to help and, armed only with the landlady’s name and number, managed to track her down and persuade her to hand over the spare key. There, on the table just inside the front door were the papers.

After a frantic hour and a very speedy drive, Uncle Norman made it to the venue and the wedding went ahead with only a 20 minute delay. He was rewarded for his triumph by being allowed to stay and happily sat watching the ceremony in his fleece, jeans and old trainers.

‘After all that we couldn’t just say thanks and bye, so we pulled in an extra chair and he just joined in. 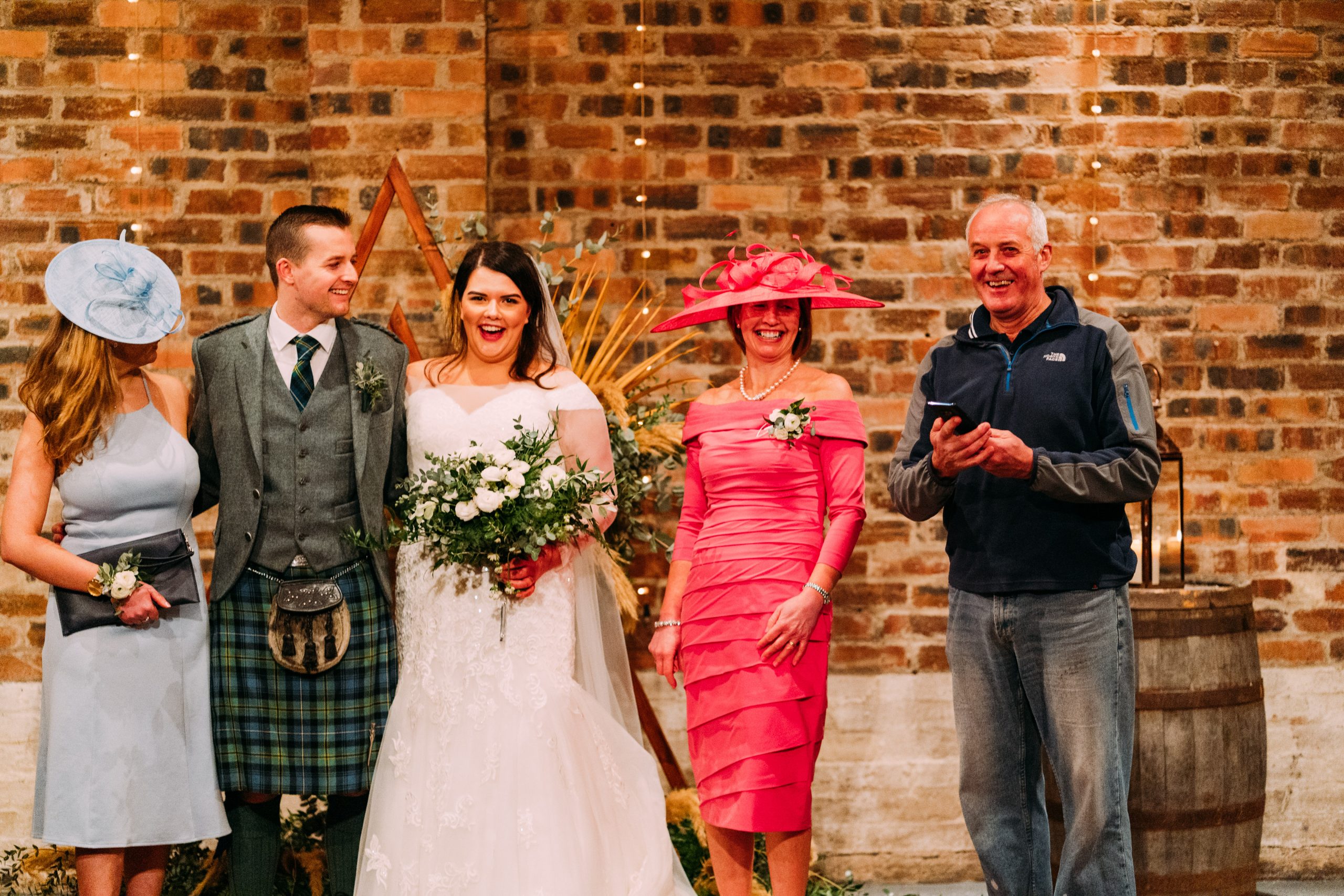 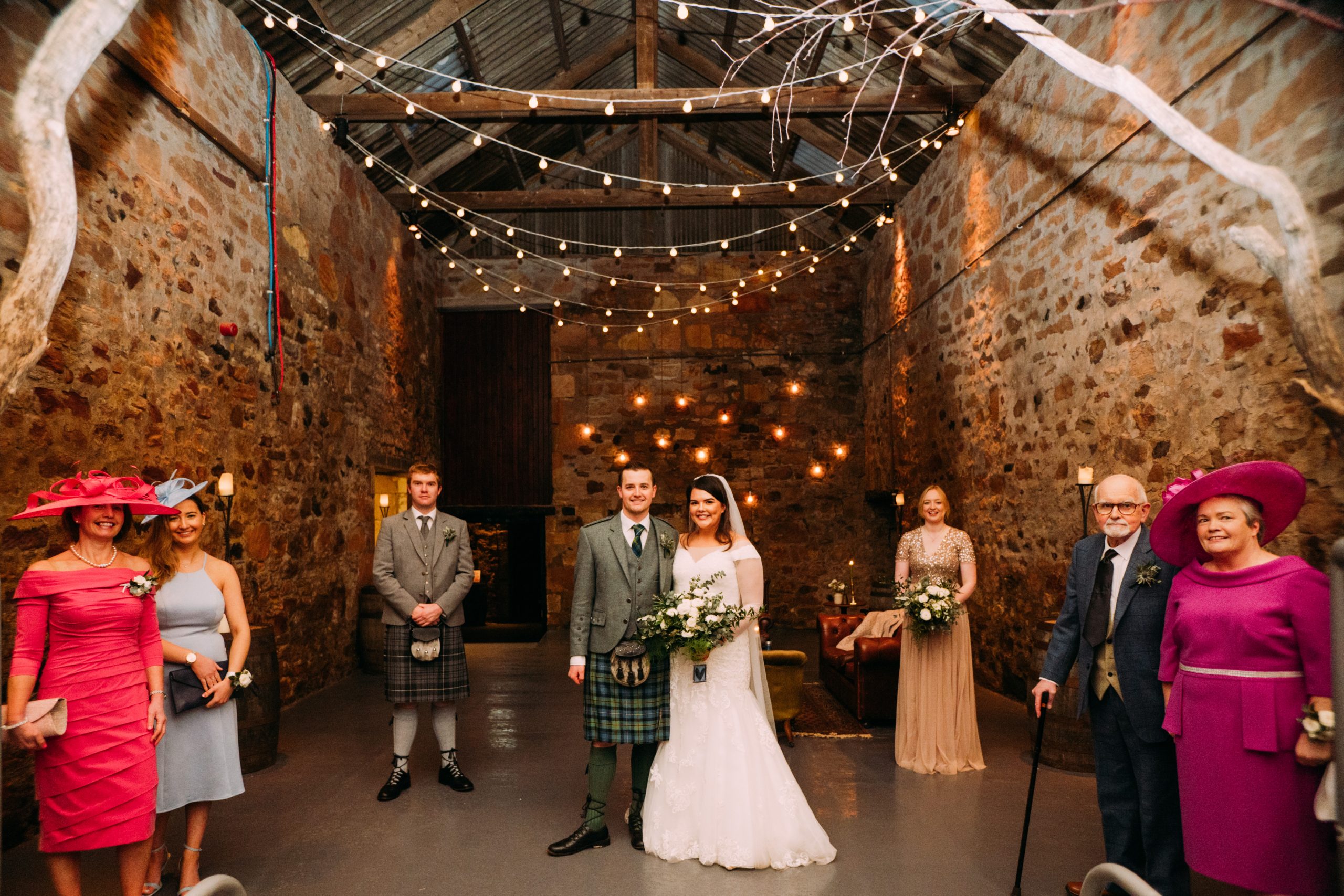 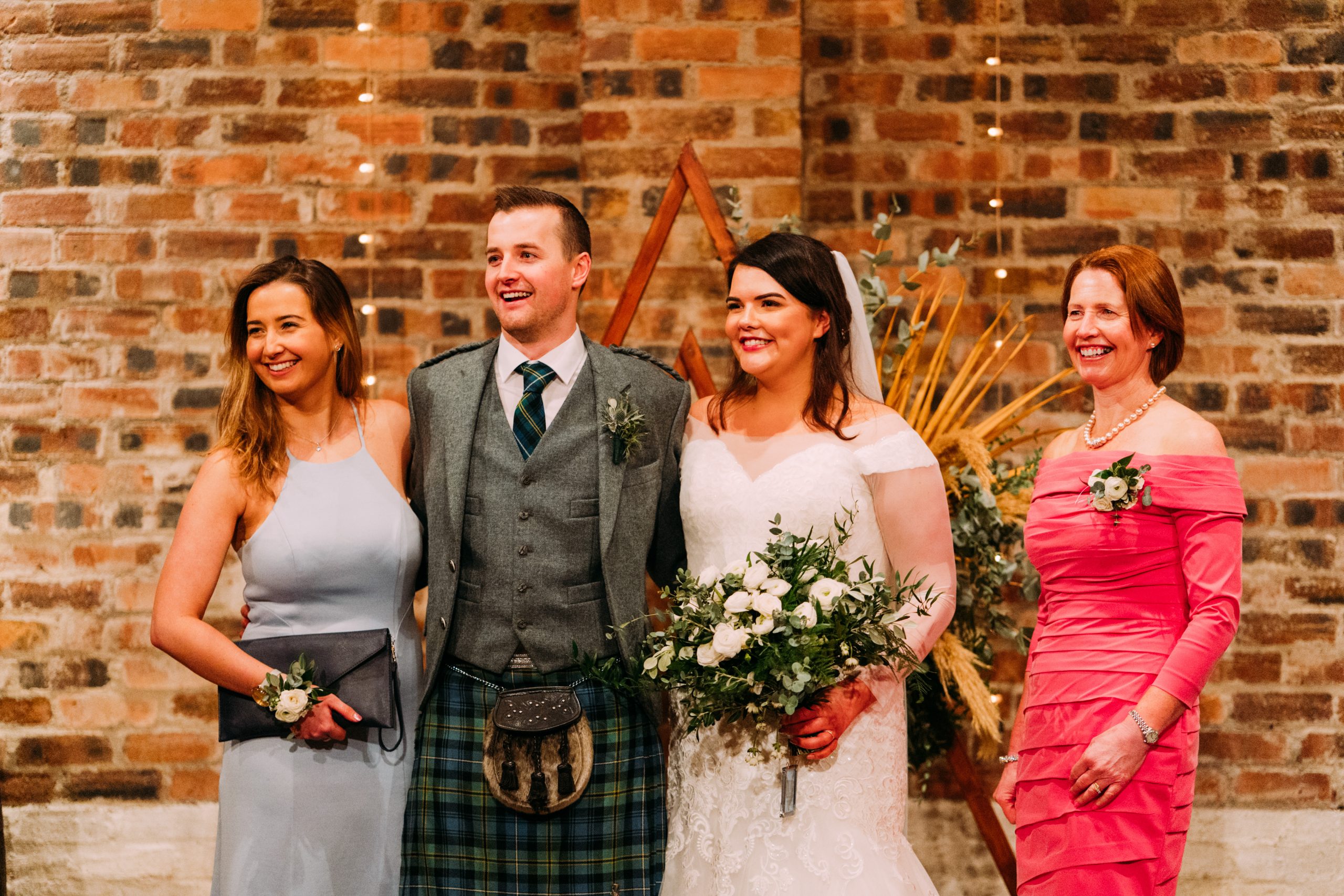 ‘Uncle Norman was one of the people we had really wanted to be there but had had to cut to keep the numbers as low as possible.

‘He’s been a bit of a father figure to Ewan since his father passed away so it was so perfect that fate somehow managed to bring him to our ceremony. It’s really weird that such a silly mistake on our part actually turned out to be the best thing.’

For Ewan and Rachel having their wedding take place against a backdrop of national lockdowns and upheaval only served to accentuate the happiness of their day.

‘We genuinely did feel so lucky that we were able to do it, we didn’t feel we missed out on anything at all. I remember we were just smiling from start to finish. We were just so genuinely happy that we had managed to do it.

‘People kept saying they were sorry for us because our plans had to be changed but that wasn’t how we felt. It all really reminded us of why we were getting married and it was honestly phenomenal.’ 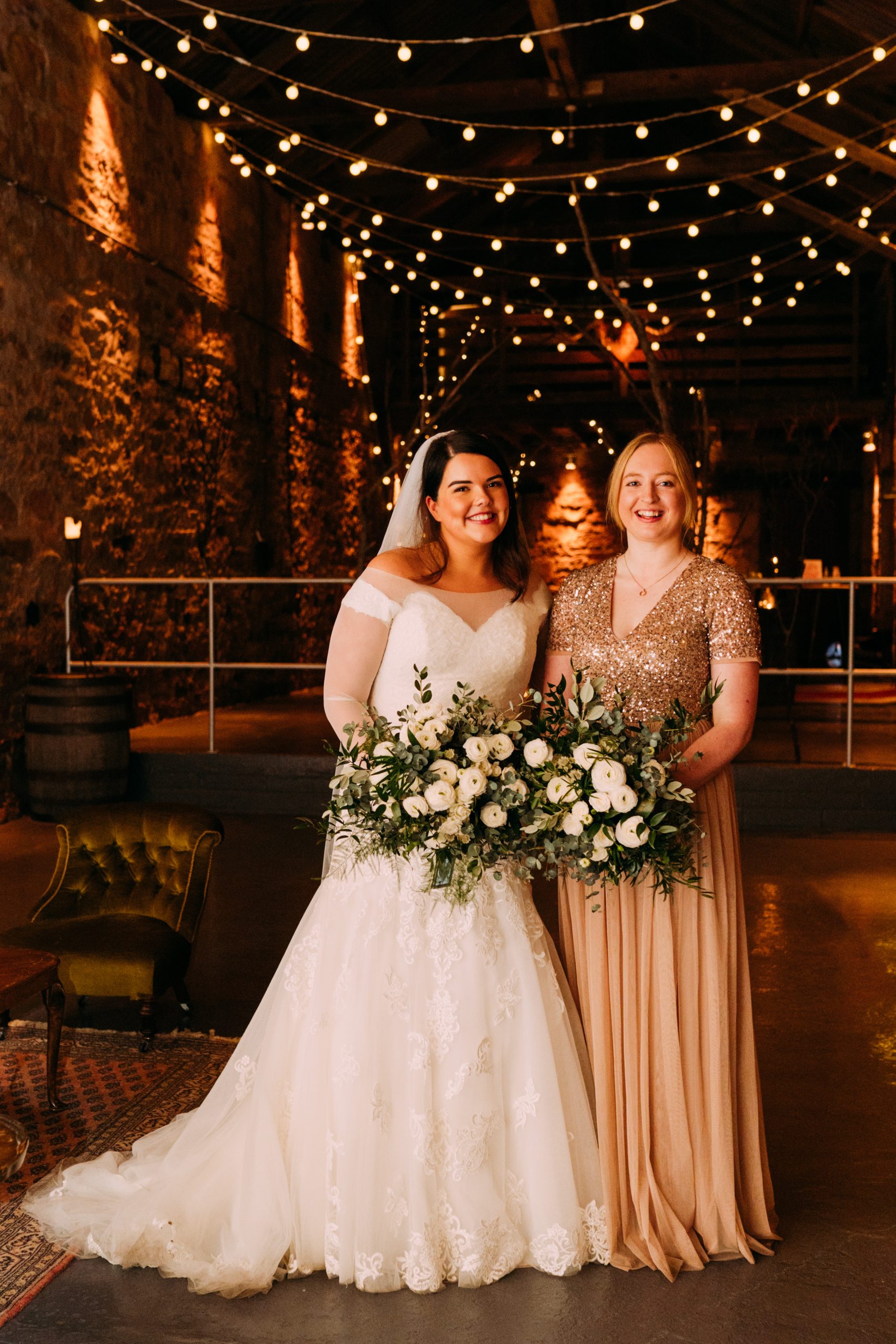 Unable to have a traditional wedding breakfast, the happy couple got a taxi home to their Airbnb, stopping on the way to pick up fish and chips.

‘I sat and ate fish and chips in my wedding dress and it was actually so us. It’s such a total cliche to say it’s the best day of your life but it genuinely was.

‘Sometimes when you’re planning a wedding you just have too many choices and it’s easy to get distracted. Covid took a lot of those decisions away from us. It was nothing like we originally planned but in a lot of ways it was better.

‘Just us there with our fish and chips, it just summed us up, it was perfect.’ 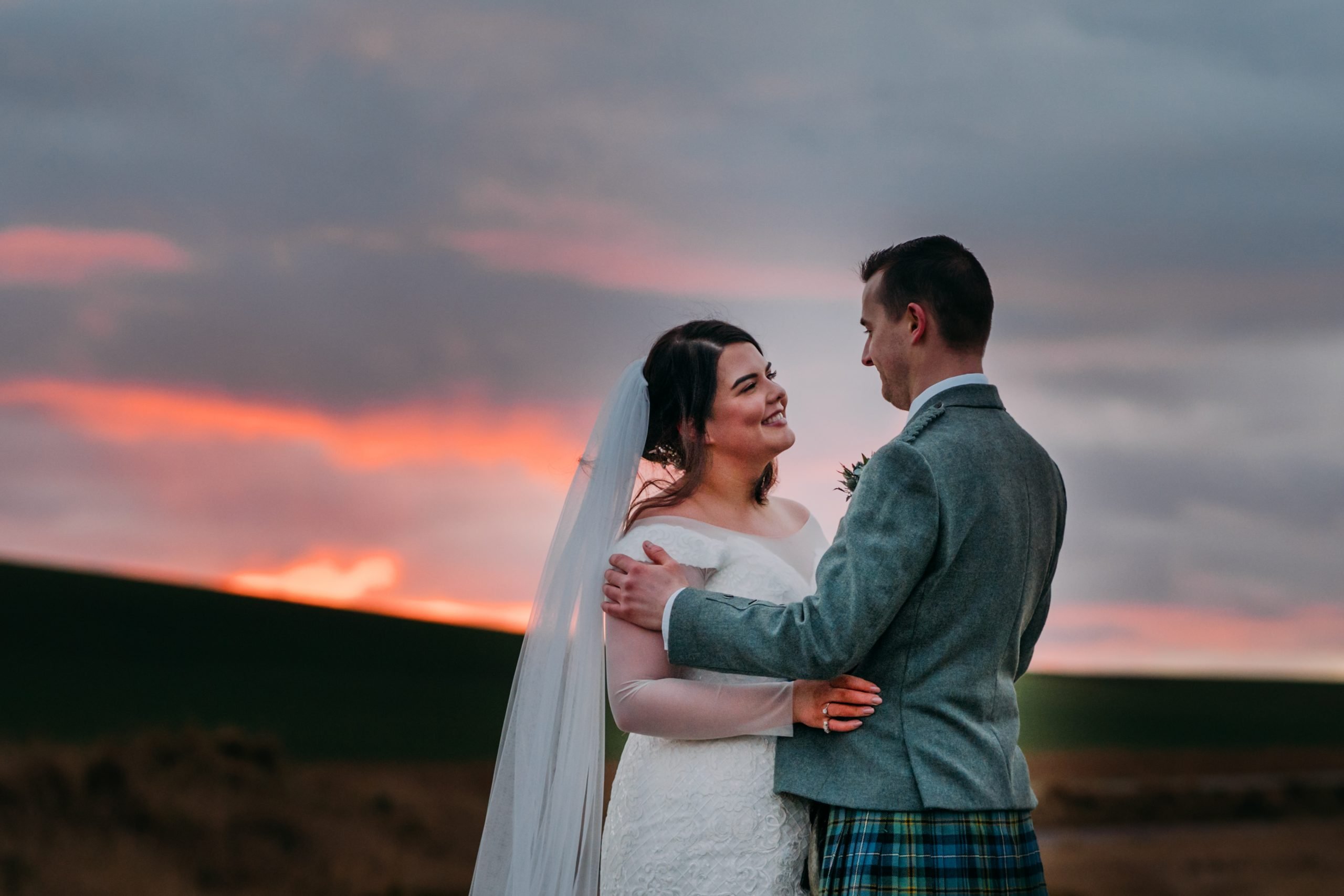 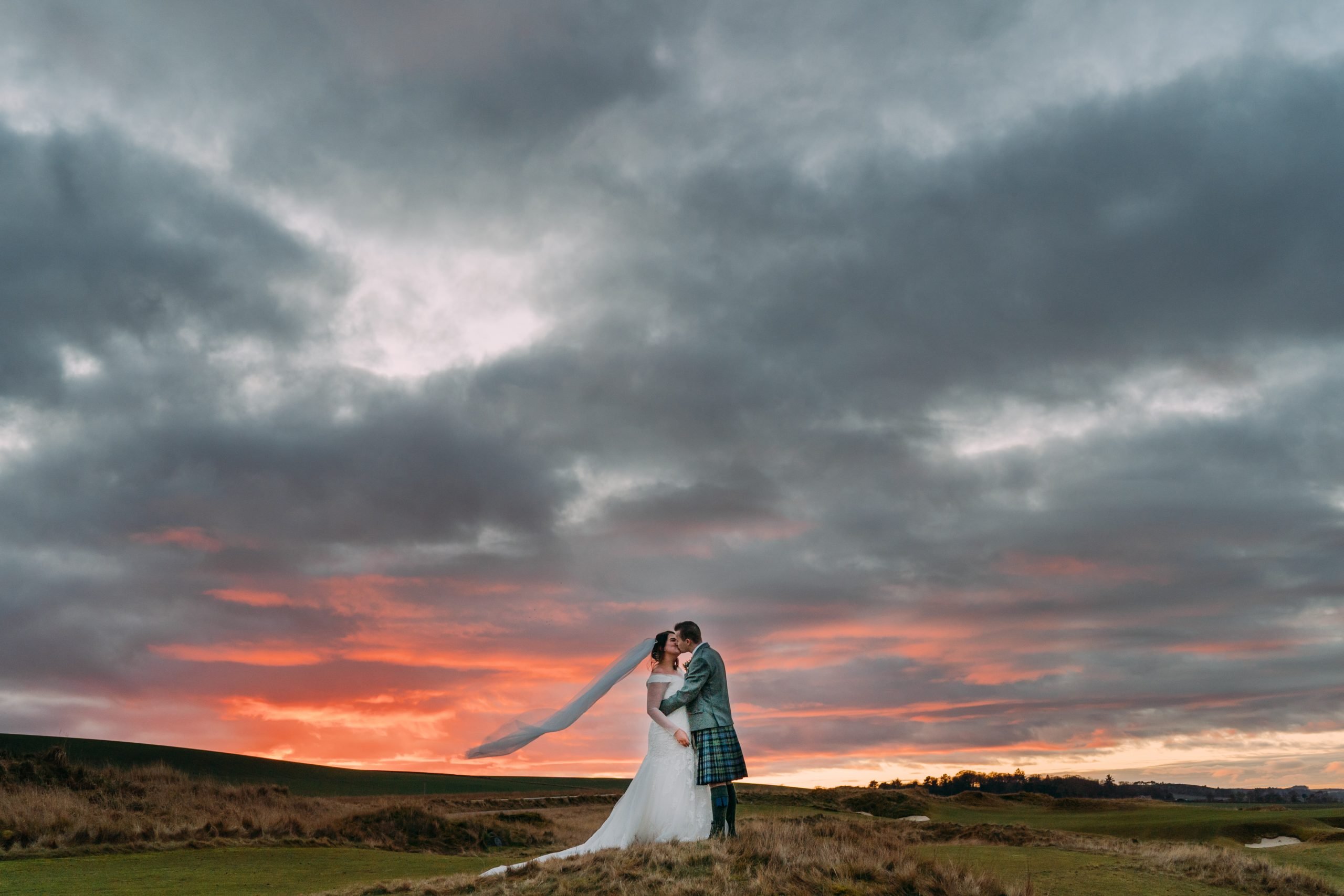 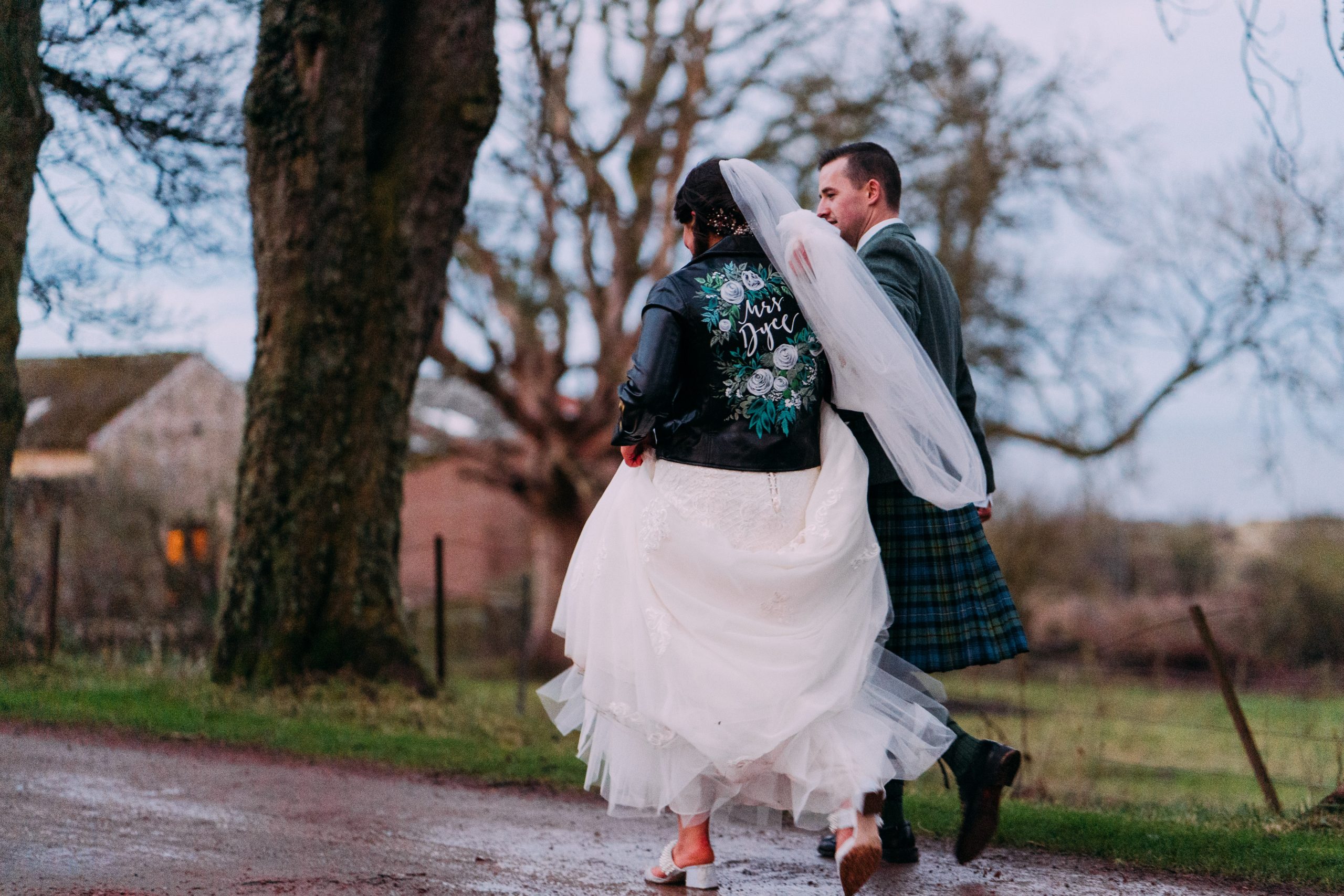 Rachel and Ewan’s top tips for a micro wedding:

Like many of our Micro Wedding couples Rachel and Ewan plan to have a big party to mark their one year anniversary in January 2022. And of course Eilidh will be back then to photograph the action on the dance floor. In the meantime we wish Mr and Mrs Dyce all the best for their future together